WXSIM Version 2020 is released! This is the first official release in about a year, and includes a dozen new features, changes, improvements, or bug fixes. The biggest news, though, is that the new WXSIMATE 8.0 has been upgraded from the original VB.Net I wrote it in (starting in 2003) to Visual Studio 2019, and is now compiled in .NET Framework 4.7.2, so that it is very up to date with respect to internet access, including new secure protocols. This should open up a long-term future for WXSIM/WXSIMATE!

On August 17, 2017, Tim Vasquez of weathergraphics.com conducted an 18 minute interview with me about WXSIM, including its ability to model temperature and cloud cover impacts of eclipses. However, I also provided a good description of the program and its background. It's a chance to see who I am, and what this program is about!.

On August 21, 2017, I was fortunate to see the total solar eclipse from atop Bell Mountain near Hiawassee, Georgia, with my wife, son, and a couple of friends. The view to the west was spectacular, as the moon's umbra approached at 1500 miles per hour. This time-lapse video was shot by our friend Tom Smarch. He used a fixed exposure, so the darkening is more dramatic than what we witnessed with our dark-adaptable eyes. One fascinating effect is that the cumulus clouds in the distance are suppressed by the cooling in the moon's shadow, which helped keep things clear enough for us to see the whole show!

It now appears, from my inspection of forecasts for a couple of sites in or near the path of totality, that the GFS model does NOT incorporate the effects of eclipses! If I'm right, this may mean that WXSIM is alone in incorporating solar eclipses into forecasts. I have just released Version 2017, Build 1.3, which takes this into account by omitting 2-meter temperature effects from GFS (via WXSIM-Lite) throughout the duration of the eclipse (first to last contact).

With the approach of the August 21, 2017 "Great American Eclipse" (which I will be watching from the northeast corner of Georgia, as my second total eclipse, the first being in 1972) I've just released WXSIM 2017, Build 1.2, with improved eclipse-effect modeling to make it easier to set up and use. I'm not sure what, if any, other weather models are set up to incorprate the cooling due to the moon's umbra sweeping across the earth, but WXSIM certainly is! Here is a scenario I ran for Columbia, Missouri (in the path of totality) using typical August conditions. The thick lines are with the eclipse; the thin ones are a comparison with no eclipse. You can see solar irradiance plummet, and temperature and cumulus cloud cover take dips in response, with even the next day's temperatures a fraction of a degree cooler as a lingering repsonse. 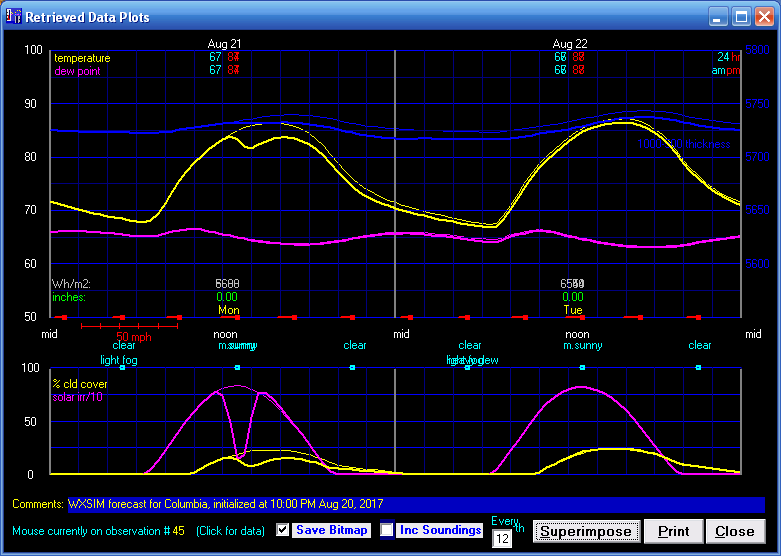 Yes, the news notes below are extremely old, as on my previous version of the web site I mostly ignored the section, while placing the news on the main page. I'm leaving the old stuff below as legacy, just to emphasize that this site has a history!

Wow, almost four years since updating this page (most "news" is placed on the main page). Probably the biggest news at this point is the introduction of WXSIMPRO, the multi-site controller program for WXSIM users who have two or more sites. This can be handled, less conveniently, by placing copies of WXSIM in multiple folders, but that gets awkward past two or three site. You can learn more here.

Another long-overdue update! Version 12.0 of WXSIM and 4.0 of WXSIMATE are now availble, with new options and a new pricing structure.

A major renovation of the surface and upper air station databases has been completed, based on stations actually reporting on several selected dates in June and July, 2008. New WXSIM customizations will be able to draw on a worldwide file of 8378 surface sites (including 473 buoys). Of the land-based sites, 5469 have METAR reports, 5920 have synoptic reports, and 3484 have both. The upper air (RAOB) data base now has 764, worldwide.

After several months of work and a great deal of testing, WXSIM Version 10.0 is released today!

WXSIM Version 9.5 is re-released, just with changes in manual.doc and the in readme9.txt to reflect recent changes in the URL's for Florida State University's data. Also, WXSIMATE is upgraded to Version 1.6.1 to reflect these same changes. The new URL's are:

FSU RAW DATA (large files) - http://www.met.fsu.edu/rawdata/
INTERACTIVE TEXT: http://dweb.met.fsu.edu/index.pl/wxdata/textwx
ALSO, when you go to the buoy data, it's best to just use: http://coolwx.com/buoydata/ to get to the main page (I'd previously put the extension "data/" after that, which seems to bring up a page that just sayd "Shame"!)

WXSIM Version 9.4 and WXSIMATE Version 1.4 are released. These are now distributed via executable setup programs rather than the old (and occasionally awkward) ZIP file method.

I am considering moving this web site, and perhaps changing my email address in the next couple of months. This is not final yet, but if I do, I'll try to set up forwarding so that you can easily find us!

WXSIMATE Version 1.1 is released. Improvements over Version 1.0 include a better-functioning progress bar, the ability to import data from Weather Display as well as WeatherLink, and an updated URL for buoy data (see below).

The FSU decoded buoy data URL changed a few days ago. It is now http://coolwx.com/buoydata/data/.

Version 9.0 is released. This a significant upgrade, especially in that it can now import data from the new WXSIMATE companion program. See New Features and Revision History for details.

A major renovation of the surface and upper air station databases has been completed, based on stations actually reporting on several selected dates in June and July, 2004. New WXSIM customizations will be able to draw on over 7200 surface sites (including nearly 350 buoys) and over 700 upper air sites, worldwide.

Also, note that the PSU buoy data has been moved to FSU. The new URL is: http://moe.met.fsu.edu/buoydata/data/

Version 8.9.1 is released. This a relatively minor upgrade, but still has a couple of nice new features and a couple of bug fixes. See New Features and Revision History for details.

Version 8.9 is released. This is the most significan upgrade in years, with many new features and larger forms and graphics. See New Features and Revision History for details.

Version 8.8.2 is released, primarily in quick response to a change in the last couple of days to the READY data's column headings. This change rendered earlier version incapable of importing READY cloud cover, sea level pressure, and precipitation. The new version restores these capabilities. A note regarding the READY site: I saw a notice on the site that access would be denied to computers attempting to use automated programs or scripts to download data from the site. WXSIM does NOT do this, and never has. The operators of the site are concerned about two things: traffic jams caused by such automated scripts or programs, and the fact that such a use (or abuse) of the site prevents proper viewing of the site as a whole, possibly allowing data to be presented without proper credit being seen. I do not know of any WXSIM users who might have tried to access the site with automated scripts, but please don't. Just take the couple of minutes to get the data manually, and enjoy the rest of this very fine site!

Version 8.8 is officially released, with a number of new features and improvements. The customization process has been improved and is more thorough than ever, with usually about 250 advection sites and new capabilities for modeling climatological normals. Also, in most cases I can thoroughly analyze home weather station data, as well as that from major reporting stations, to fine tune to your site. The price for customization is now $74.95.

Work is already underway on the next release, Version 8.8. It will contain a few features designed to reduce the number of mouse clicks needed to run the program, thus saving users a bit of time. A couple of other improvements are planned as well.

You can now view a "webcast" interview with the author, discussing the program! I was invited to appear on the HVAC Channel, watched by a fair number of Heating, Ventilation, and Air Conditioning folks - perhaps not the number one market for such a program - but a nice opportunity nonetheless! You can view the streaming video and audio at http://www.hvacchannel.tv . As of this writing, it's under "Idea Exchange" at the upper left of the page; by the end of July I understand it will be in the archives. It's just over 30 minutes long and includes a slide presentation as well as actual display of the program in operation. I hope it will answer some questions, and it at least lets you see who's on the other end of this program!

Finally, I would be interested to hear ideas regarding possible future upgrades, modules, or related services. Here are a few ideas I'm considering:

WXSIM 8.6, released today, can now handle the changes to the READY site, including the change from AVN to GFS models (which is mainly a renaming operation).

A couple of days ago the READY site had big changes in meteogram text format. The old format is still available until February 1, 2003, but I've noticed a couple of changes even in that, which preclude full reading by WXSIM 8.5 (though you can change a couple of headings in the files to the old names and get it to work.

The good news is that I've already developed a new parsing procedure to read the new format. I'm testing it now, along with a new feature that will allow import of NGM and/or AVN MOS for advection sites, which will allow much better advection data upon wind shifts. I hope to make this public on this site in the next few days.

Version 8.5 is now available, including updates on the manual and sample sites in the shareware package (now including Canberra, Australia). This is the most significant upgrade in over a year. The new files are available free for existing users here.

The READY site has had some format changes and improvements. All data used by WXSIM is still readily accessible, perhaps a bit more conveniently.

Version 8.4.1 is now available. FSU's site has had some changes. Currently, the large, raw data files for surface data are not available, but the interactive text form is working, though it's URL has changed a bit: here

The READY site's 40 km ETA meteograms now go out to 84 hours instead of just 60. WXSIM Version 8.2 can now handle this longer data set (earlier versions would have encountered an error).

Version 8 will likely be released before the end of June. It will have new features including a new advection option, improved cloud modeling from imported data, and new stability indices and convective outlooks. The was a change in the READY Wind Flag format: it used to give U and V wind components, and now gives direction and speed. Version 8 will handle this. Meanwhile, you should be able to get accurate READY winds by separately importing the U and V components (which is an option on the READY meteograms).

There has been yet another change (after two others in the last two weeks or so) in NOAA's READY site's meteogram text data: the year was changed from "01" to "2001". Version 7.3 properly imports the new format as well as the older ones.

The FSL's MAPS site seems to be fully operational again, with MAPS as well as RUC-2 soundings regularly available again as far as I can tell.