The very nature of WXSIM lends to its use for a single location. However, some users have multiple sites of interest, and sometimes multiple weather stations which they would like to use with WXSIM. It is possible to order multiple customizations and install them on multiple computers or in multiple folders on the same computer, running WXSIM and WXSIMATE in auto run on their own schedulers. This may work reasonably well with just two or three sites, but with larger numbers this gets unwieldy, as scheduling them to avoid running at the same time may be difficult. Also, changing choice of output formats or numerous other options then has to be repeated for each site.

A great solution to this is WXSIMPRO. This program, with its own scheduler, takes control of WXSIM and WXSIMATE (and wret.exe, for additional text and graphical products), running them sequentially for each site, with potentially unique settings for each one. It also packages the output into files with site specific names, optionally stored in site-specific folders, and also in one large text product containing the plain text output of all the sites. Finally, it allows easy global or site-specific changes in all the options in WXSIM and WXSIMATE. In short, it is a very easy to maintain and time efficient solution to the program of running multiple sites in the WXSIM system.

Here's a screen shot of the program itself: 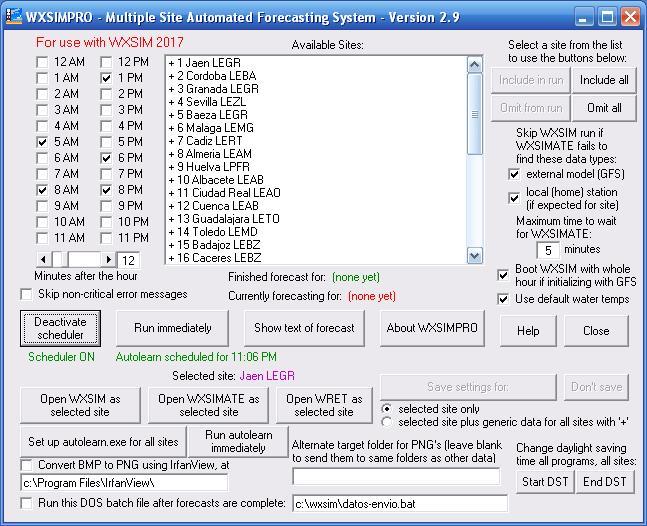 and here is the user's manual, as a downloadable Word document. Also, you can watch a movie of the program in action. NOTE: this is a large (171 MB) file, even though it's only a 3 minute and 46 second clip, and may take several minutes to download. I'm not sure I used the best way to record it, and it's not compressed. Also, I had to keep it short by running just a "bare-bones" forecast for two sites, AND the act of recording it greatly slowed the program down and made it "jerky"! Nevertheless, it may be interesting to see the series of steps as WXSIMPRO directs the actions of wxsimate.exe, wxsim.exe, and wret.exe.

I originally started writing WXSIMPRO at the request (and with some "R&D" financial support) of a meteorologist making electric load forecasts for an energy company (which I won't name here). He was running it successfully for 8 sites last I heard (years ago - I don't know what happened after that!). Based on that experience, I conceived of WXSIMPRO as product of mainly commercial application, thinking I might have rare sales, but at a relatively high price. However, instead of other commercial requests for the product, I began to get inquiries from individuals who liked WXSIM and wanted to run it for multiple sites, mainly for private purposes. I told them about the product, priced it according to the situation, and developed it by addressing the needs expressed by these (very few) users.

There are several WXSIMPRO users, with numbers of sites ranging from four up to 55 (the second highest number being 14). With these larger numbers of site, the program is a huge convenience and a real time saver!

With the system on on a firm foundation, and easier to use and more powerful than ever, I am now ready to advertise it to the general WXSIM community. With the highly varied nature of the applications, it has been hard to set a price for the system. I have made a very large time investment in developing it, and setting up existing sites with the system requires file creation, modification, and testing on my part, plus open-ended user support from then on. The amount of work will of course vary with the number of sites desired, whether these are existing customizations or new ones, and whether they are supposed to be enhanced customizations using historical data from home weather stations, or official reporting sites (which are usually a bit easier, as good climatological data is often available.

For now, I plan to determine exact pricing based on discussion of the particular situation with the user. The base fee, however, is $90, plus per-site charge which will vary with the nature and number of sites to be done (and whether any are existing sites). Again, situations vary, so please enquire!